Figure 1. The formation of horseshoe vortex around a bridge pier.

The flow around an abutment involves highly separated vortex flow as shown in Figure 2. A separation bubble is formed at upstream corner of the abutment. Downstream of the abutment, unsteady shedding wake vortices are created due to the separation of the flow at the abutment corners. These wake vortices are very unsteady and oriented approximately vertical with low pressure at the vortex cores. These vortices act like small tornadoes, lift up sediment and create a large scour hole behind the abutment. The down flow at the front of the abutment is developed under the large vertical pressure gradient around the stagnation point of the approaching flow. The down flow rolls up and forms the primary vortex as shown in Figure 2, which is similar to the formation of the horseshoe vortex around a single bridge pier. Our scAUR™ scour-countermeasure products prevent the above scour-causing complex flow around the hydraulic structures and are permanent solutions to the local scour problems around hydraulic structures. 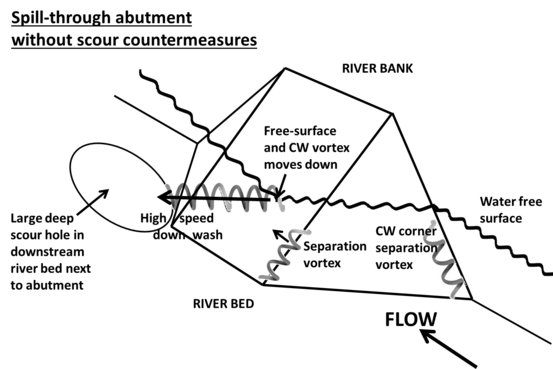 Some Recent Bridge Failures due to Scour

Cause of Bridge Scour 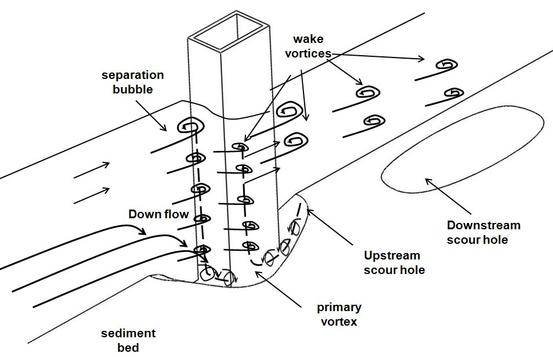 Bridge scour is the removal of sediment

such as sand and rocks from around bridge abutments or piers. Scour can scoop out scour holes, compromising the integrity of a structure. 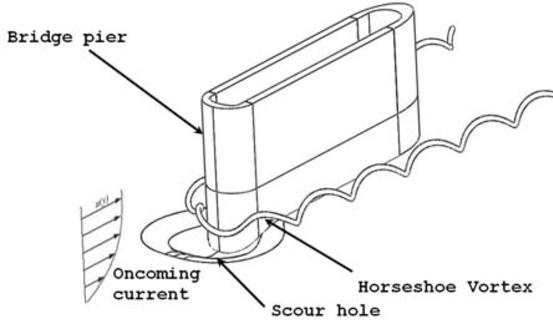 Removal of river bed substrate around bridge piers and abutments, also known as scour, presents a significant cost and risk in the maintenance of many bridges throughout the world. Bridge scour is comprised of three components: long-term aggradations and degradation of the river bed, general scour and local scour.  Among them, local scour contributes mostly to bridge scour. The bridge substructures susceptible to local scour, such as piers and abutments, change local hydraulics drastically because of the appearance of large-scale unsteadiness and shedding of coherent vortices, such as horseshoe vortices. Figure 1 is a sketch of the horseshoe vortex formed around the base of a bridge pier by a separating boundary layer. The horseshoe vortex has high lift and shear stress and triggers the onset of sediment scour and a scour hole is formed as shown in Figure 1.