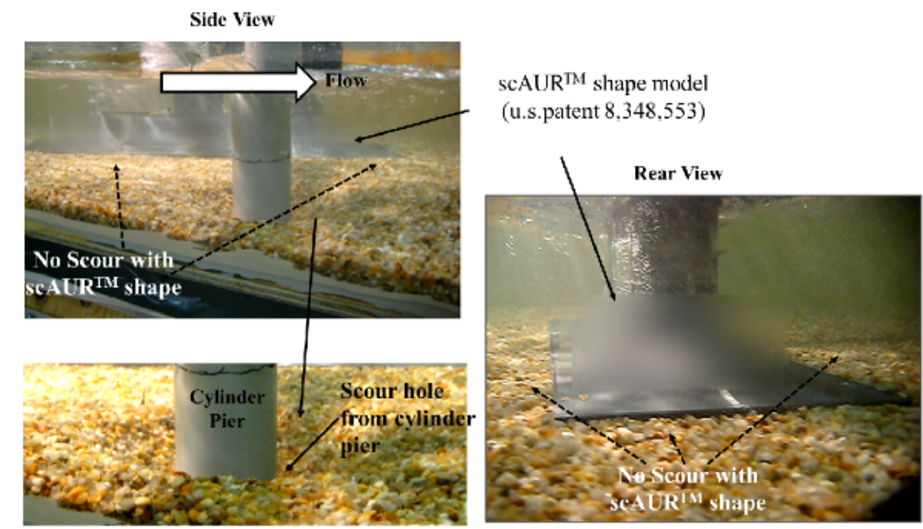 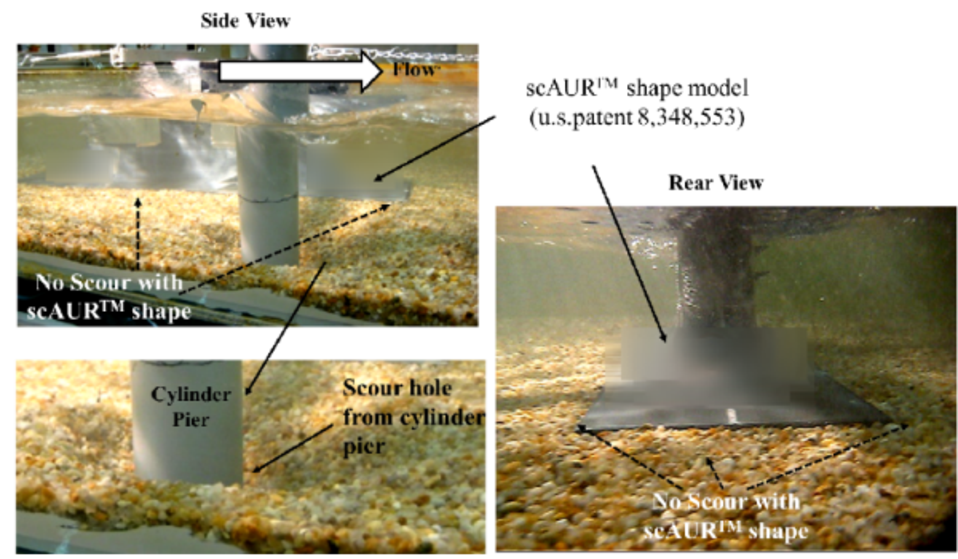 ​Test results:
The pictures below are snapshots of  the flume test videos after the scour process reached equilibrium.The same size large scour hole appeared around the cylinder pier as for case one above. Gravel around the scAUR™ model were stationary at all times and no local scour occurred. Unlike the straight-ahead case, shed vortices appeared around the front and back of the upper pier. The flow visualization video with a single tuft shows that for twenty degrees attack angle, the origin of shed vortices was attached to the model surface. No scour hole was observed on the gravel bed around the scAUR™ model. Please contact us, if you are interested in the flume test videos.

​Since the scouring flow phenomena are not Reynolds number dependent, our flume tests of scale scAUR™ models verify that scAUR™ products are permanent solutions to local scour problems. AUR, Inc. (NCHRP-IDEA Project 162 Report) and Sheppard et al. (NCHRP report 382) show that if a hydraulic structure does not scour at model scale, it will not scour at full scale. More data with finer gravel and sand show no scour around the model at open-bed scour flow speeds and higher speeds (NCHRP-IDEA project 162 Report). 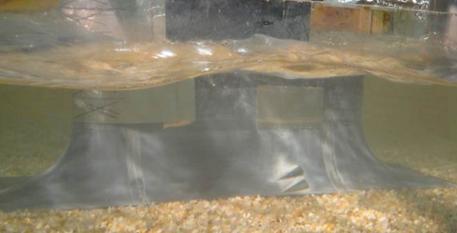 ​Test results:
The pictures below are snapshots of  the flume test videos after the scour process reached equilibrium. During the entire process, no scouring phenomena were observed around the scAUR™ model.  In the meanwhile, a big scour hole was formed around the cylinder pier by the primary horseshoe vortex. Therefore, for the straight-ahead case, this design prevents local scour around the scAUR™ model. Please contact us, if you are interested in the flume test videos.

The Dry River approaches the Route 613 bridge piers at about 45 degrees to the pier lengthwise centerline with massive separation around the nose during high water, as shown by earlier AUR flume experiments. Even so, AUR is able to provide a configuration of scAUR™ and VorGAUR™ products that prevent scouring vortices from forming around a pier on this bridge. To prevent separation around the pier nose and tail during a flood, stainless steel nose and tail extensions to the pier are used (patent pending), as shown in Figure 3 below on the AUR flume model, forming a “dogleg” shape. The centerline of the pier nose and tail extensions and the nose and tail of the scAUR™ are aligned with the on-coming flow direction. VorGAUR™ vortex generators are used to energize the near-wall flow upstream of the adverse pressure gradient regions around the pier and prevent separation and scour. No scour around the model and downstream.